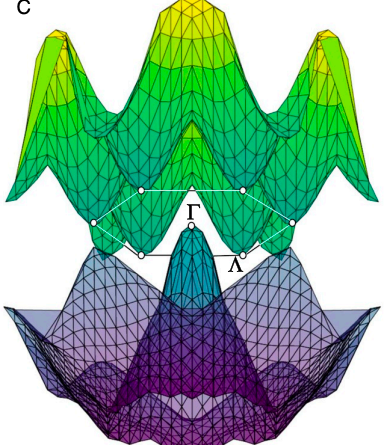 Spontaneous condensation of excitons is a long-sought phenomenon analogous to the condensation of Cooper pairs in a superconductor. It is expected to occur in a semiconductor at thermodynamic equilibrium if the binding energy of the excitons – electron (e) and hole (h) pairs interacting by Coulomb force—overcomes the band gap, giving rise to a new phase: the “excitonic insulator” (EI). Transition metal dichalcogenides are excellent candidates for the EI realization because of reduced Coulomb screening, and indeed a structural phase transition was observed in few-layer systems. However, previous work could not disentangle to which extent the origin of the transition was in the formation of bound excitons or in the softening of a phonon. Here we focus on bulk MoS2 and demonstrate theoretically that at high pressure it is prone to the condensation of genuine excitons of finite momentum, whereas the phonon dispersion remains regular. Starting from first-principles many-body perturbation theory, we also predict that the self-consistent electronic charge density of the EI sustains an out-of-plane permanent electric dipole moment with an antiferroelectric texture in the layer plane: At the onset of the EI phase, those optical phonons that share the exciton momentum provide a unique Raman fingerprint for the EI formation. Finally, we identify such fingerprint in a Raman feature that was previously observed experimentally, thus providing direct spectroscopic confirmation of an ideal excitonic insulator phase in bulk MoS2 above 30 GPa.