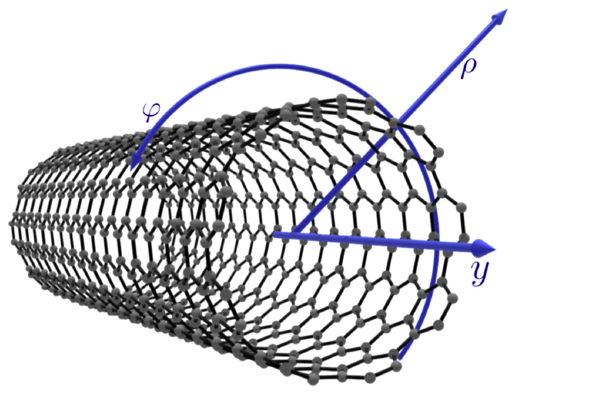 The screening of Coulomb interaction controls many-body physics in carbon nanotubes, as it tunes the range and strength of the force that acts on charge carriers and binds electron-hole pairs into excitons. In doped tubes, the effective Coulomb interaction drives the competition between Luttinger liquid and Wigner crystal, whereas in undoped narrow-gap tubes it dictates the Mott or excitonic nature of the correlated insulator observed at low temperature. Here, by computing the dielectric function of selected narrow- and zero-gap tubes from first principles, we show that the standard effective-mass model of screening systematically underestimates the interaction strength at long wavelength, hence missing the binding of low-energy excitons. The reason is that the model critically lacks the full three-dimensional topology of the tube, being adapted from graphene theory. As ab inito calculations are limited to small tubes, we develop a two-band model dielectric function based on the plane-wave expansion of Bloch states and the exact truncated Coulomb cutoff technique. We demonstrate that our—computationally cheap—approach provides the correct screening for narrow-gap tubes of any size and chirality. A striking result is that the screened interaction remains long-ranged even in gapless tubes, as an effect of the microscopic local fields generated by the electrons moving on the curved tube surface. As an application, we show that the effective electron-electron force that is felt at distances relevant to quantum transport experiments is super Coulombic.